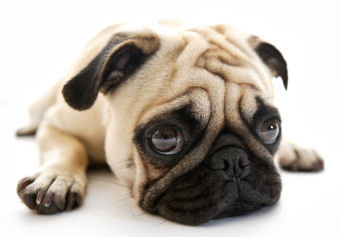 (Health Secrets) Cushing’s Disease is a common condition in older dogs. Too often, the symptoms are attributed to the normal aging process. Left untreated, canine Cushing’s can lead to serious conditions such as diabetes, pancreatitis, heart disease, seizures, kidney failure, and nervous disorders. However, with the proper natural treatment, pets with Cushing’s can go on to live a longer and more comfortable life.

In a smaller percentage of Cushing’s cases, an adrenal tumor is responsible for the secretion of too much cortisol. 50% of these tumors are benign and 50% are malignant with the probability of expression in the lungs and liver too.

The third cause of Cushing’s in dogs is from overmedication with cortisone, primarily given to relieve allergies.

Cushing’s can be characterized by the following symptoms:

Other tell-tale signs of Cushing’s can be seen by the dog’s appearance.

1. Enlarged abdomen.
2. Muscle weakness.
3. Thinning hair.
4. A “bony” appearance in the head.
5. Hyperpigmentation of the skin.

Behaviorally, the dog may:

Cushing’s disease is usually difficult to diagnose. No single test is conclusive. Three specific tests are given for a proper diagnosis: a urine cortisol/creatinine ratio test, an ACTH stimulation test, and low and high dose dexamethasone suppression tests.

Rather than depend on drugs that destroy the outer layer of the adrenal glands, there are natural and homeopathic remedies that will normalize a dog’s output of cortisol. Here are some of the best ones:

* Dandelion – Helps normalize adrenal function. It is also an excellent tonic for the liver and kidneys. Dandelion reduces inflammation in the body and also contains vitamins and minerals necessary for hair growth.